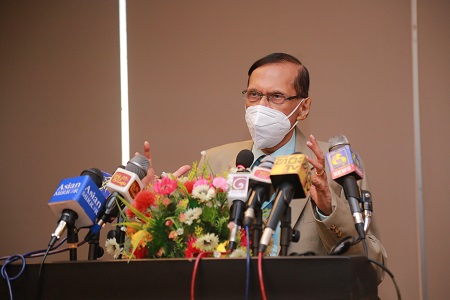 ‘The Book of Ethics’ will be printed soon – Minister of Education Professor G.L. Peiris

The action will be taken to print and distribute among school children the book of ethics that had been prepared to be printed but subjected to intentional delay for 5 years, said The Minister of Education Professor G.L. Peiris. The minister stated this while participating in the event of handing over of the appointment letters to Religious Advisory Board held recently at the auditorium of the ministry.

‘I see the appointment of the members to religious boards as a very timely action. Providing a complete education is the prime concern of our ministry. Education is not just imparting the knowledge of different subjects and providing necessary facilities to obtain such qualifications. The people produced from this system are enriched with knowledge but if they are poor in morals and ethics, it is not beneficial for the society. Even today we see through the media that a large amount of narcotic drugs are captured. Some of them are subjected to the capital punishment. Some people say the capital punishment is suitable. But we cannot find a solution for this problem only through this measure. The people engaged in crimes think that they will not be arrested. Former Indian Prime Minister Jawaharlal Nehru has mentioned in his book ‘Discovery of India’ “What the law can do is limited. I would say that one enters into the civilized behavior at the end not because of the fear of law but due to the positive feelings generated from within.”

The children in growing age must have a flexible mind. When providing the school education to them, it must be done through structures. That is why the religious education is important. Even if they go to Dhamma schools, it is not sufficient to receive subjective knowledge. The most important thing is to perfect their lives.

We know that there is a population in our country who speak several languages and believe in several religions. The education has a major role for maintaining the solidarity and harmony among them. The children’s flexible mind must be cleared through education before entering the universities. For that purpose, our ministry has a special responsibility. We dedicate to fulfill that obligation correctly and efficiently.

We know that there are extremists in any society. The only strong mechanism to minimize and balance those things and to stabilize the society is the education. We have the ability to fill this gap.