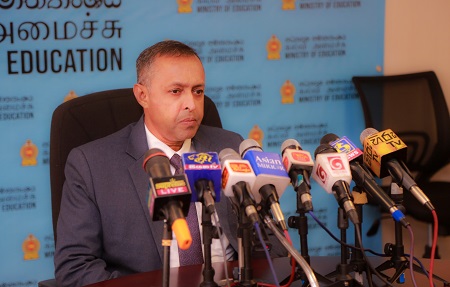 Schools in the Western Province are commenced from 25th of January only for grade 11 except the schools in locked down areas.

The Minister of Education Professor G.L. Peiris said that the grade 11 of the schools in the Western Province will be started from 25th of January except the schools in locked down police areas due to covid reason.

The ministry of education has taken all steps to open the schools from 11th of January including primary grades in all the provinces in the island except the western province and other locked down areas. The minister mentioned that this decision was taken considering the main necessity of completing the syllabuses of all subjects of grade 11 students including the students in the western province who are scheduled to face the G.C.E. ordinary level examination in the month of March.

So far the ministry of education has taken steps to distribute all textbooks related to school children in grades 1 – 11 to all schools and in addition to that the opportunity has been given to get any textbook downloaded from the official web site of the education publication department, the minister further stated.

The steps will be taken to release the results of the G.C.E. Ordinary level exam also within a short period of time in order not to happen any lapse of time or disadvantage for children due to the postponement of O/L exam till March of this year that had been scheduled to hold in December last year. And also all the steps will be taken to commence the advanced level classes for those children by the month of July, the minister said.

It is a most challenging decision to open the schools in this country in the face of covid pandemic but it was taken with a firm responsibility for the continuation of the education of the children without any delay following the complete instructions of the health authorities. The ministry of education has submitted a complete program about the way of taking actions by the principals, teachers, students and the parents before and after the opening of schools, the minister further explained. Awareness about this program has been made through the official website of the ministry of education (www.moe.gov.lk) and also through the other media.

An instructional manual consisted of the common instructions that should be followed by the teachers, students and the parents, the maintaining of the interval of the schools and specially, the transportation of the students has already been sent to all schools. During the period from Wednesday the 6th of January to Sunday the 10th of January, the health protection  program related to each school must be prepared and teacher-parent meetings and discussions must be held based on this health protection program, the minister said.

The minister of education expressed these views while participating in a media discussion held recently (04) in Colombo.