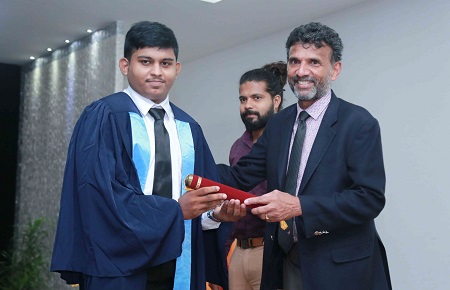 A young generation empowered with innovations thinking out of the box must be created.

The Minister of Education Dr. Susil Premajayantha said that the admition to arts and commerce sections in the universities in Sri Lanka is 75% while 25% enters to science and technology section and it is a crucial problem for future development of Sri Lanka. Therefore, a young generation empowered with innovations thinking out of the box must be created. He stated this while participating as the chief guest in the function held for distributing certificates to the trained technicians who completed the new technology course designed for creating a labour force of solar technology. This function was held at the “Kenimadala” auditorium of National Apprentice and Technical Training Authority.

Further expressing his ideas at this occasion, the minister said that The STEM educational concept started in the western countries giving the priority to Science, Technology, English and Mathematics has now been developed as STEAM including Arts also into it. This concept will be used in this country as a turning point in the next ten years period and the teachers for those subjects and the necessary facilities will be provided also to the rural schools. Through this measure it will be possible to end the graduate unemployment in the future, he said.

Furthermore, one of the major issues in our country is the shortage of medium level technicians and to solve this problem the institutions including National Apprentice and Technical Training Authority provide their contribution. The minister pointed out that the ministry has integrated these three subjects Technology Education, General Education and the Higher Education into the common subject Human Resource Development. The minister expressed his thankfulness for the contribution provided for the development of this subject by Peradeniya, Ruhuna, Kelaniya and Jaffna universities collectively.

The minister stated that starting future projects through proper research and surveys without any political involvement, their sustainability will be stable. The knowledge of entrepreneurship obtained from those projects will increase the employment opportunities of those who complete the courses. It is also a good knowledge for engaging in self-employment and for the private sector this is an ideal investment opportunity. The country can march forward by taking policy decisions considering these things going beyond the traditional framework, the Minister of Education said.

At this occasion the minister said that 31,000 out of 53,000 graduates appointed recently by the government will be appointed as teachers after holding a test and selecting only the suitable people on merit and also, they will be trained with diploma in education in addition to their degrees. The quality development of education will be upgraded through these measures.

A gathering including Professor Shiva Shivanadan and the Chairperson of the National Apprentice and Technical Training Authority Mr. Tharanga Naleen Gamlath attended this occasion