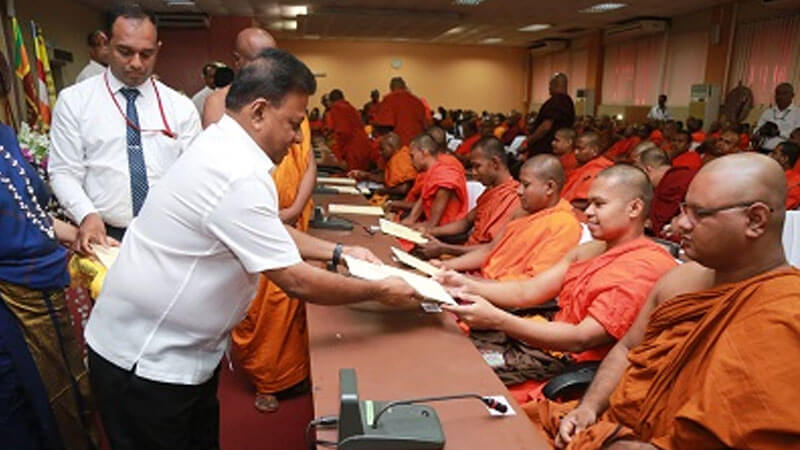 The Minister of Education Dallas Alahapperuma says that Pirivena education holds a prominent place in the field of education in this country and it should not be limited merely to a branch. The changing of country’s attention towards the Pirivenas from government to government and from minister to minister must be stopped and a strong administrative structure must be established confirming the continuous existence of Pirivenas and ascertaining the posts in it. The minister further says that he suggests to the Pirivena Education Board to give him the necessary recommendations to establish a Pirivena department in the future.

The Minister stated these ideas while participating as the chief guest in the function held yesterday (01) at Isurupaya, the Ministry of Education to hand over the appointments to new Pirivena teachers.

A few days earlier the minister’s attention was drawn to this matter of providing Pirivena teacher appointments which had been unable to implement and accordingly, steps have been taken to give these appointments within a short period of time receiving the instructions and guidance of Hon. President and the Prime Minister.​

There is a duty assigned to the Pirivena education in this country for the non-Sinhala Buddhists in Sri Lanka and in other countries as well. And also the responsibility of transferring the wonderful message of Buddhism to the world community that is empowered with modern technology lies with the field of Pirivena education, the minister further emphasized at this occasion.

Representing both, lay and clergy, 305 Pirivena teachers received appointments at this occasion. The head of Maligakanda Vidyodaya Pirivena, Colombo, chief Sanghanayaka of Southern and Western Provinces and a member of Pirivena Education Board Rev. Dr. Balangoda Sobhitha Thero, the Director of Pirivenas Rev. Watinapaha Somananda Thero and some other Buddhist priests, Education State Secretary Mr. Ranjith Chandrasekara, Additional Secretary of Education Services Mr. Hemantha Premathilaka and a group of senior officers had joined in this occasion.