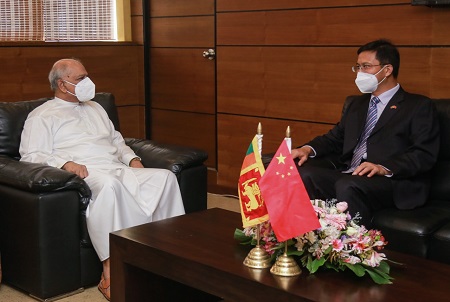 A meeting between the Chinese Ambassador in Sri Lanka Mr. Qi Zhenhong and The Minister of Education Dinesh Gunawardana was held on 05.11.2021 at Isurupaya, the ministry of education, Battaramulla.

First of all, the minister expressed his gratitude to the ambassador of China for the support extended by the Republic of China when Sri Lanka faced many difficult situations internally and externally and for a long time the Republic of China has been a genuine friend working cordially with Sri Lanka in the spheres of economic, cultural, political and social. The minister also expressed his thanks for the support and encouragements provided in the fields of education, research and training in Sri Lanka.

The minister further stated that the opening and conducting educational activities in the schools of Sri Lanka are being done according to a timeframe and in this process it was possible to expedite the vaccination of more than two hundred and thirty thousand teachers due to the assistance given by the Chinese government and it was a great strength for regulating the education in Sri Lanka.

It was also discussed at this meeting to resolve the issues that were not solved so far. The ambassador said that the minister is a genuine friend of China whatever the field he is engaged in and he also said that the foreign minister in China has congratulated the minister who has been offered with portfolio of the minister of education in Sri Lanka.

The minister emphasized the possibility of receiving the assistance of China for establishing the inter-university education exchange systems between the universities in China and Sri Lanka and also to develop the information technology facilities in rural schools in Sri Lanka.

The President of Sri Lanka Gotabhaya Rajapaksa has requested from the government of China to establish an agricultural technology university in Hambanthota and it would be a great strength for the development of agriculture in Sri Lanka and the minister requested to draw more attention to this matter.

The minister requested to draw the attention towards the establishment of exchange relationships between the colleges of education and the schools in both countries and the minister further requested from the ambassador to give priority of schools for a pilot project for that purpose.

The ambassador stated that the pathways have been opened for a bright future for Sri Lanka when it is observed about Hambanthota harbor and the industrial city. And also, it can be developed up to a Logistic International Hub, said the ambassador.

It was also requested even though the students who were studying in China and came back to motherland because of the covid pandemic have been provided with online education facilities but to provide the entry facilities to China for the students who are studying the subjects like medicine who need practical training.

The minister and the ambassador reminded the past relationships between Sri Lanka and China like rubber rice agreement and stated such relationships are further strengthened.