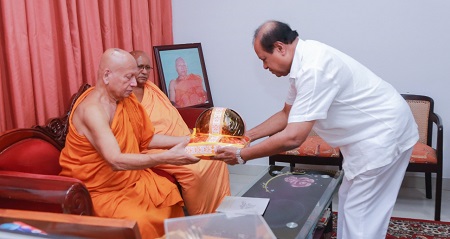 School attendance of teachers and the students has exceeded 80% and 73% by now. The steps have been taken to strengthen the school transport service by starting the new “School Service” transport service providing fuel for them two days per week under a proper methodology after having discussions with all sections such as Transport Board, Petroleum Corporation and private school vans and buses associations. By next Monday this situation will become much better, said The Minister of Education Dr. Susil Premajayantha. It happened when he became the Leader of the House and met Rev. Bellanwila Dhammarathana Thero the Chief Incumbent of Bellanwila Rajamaha Viharaya for receiving blessings.

The missed time for school children will be recovered by decreasing the holidays and working more and most of the examinations delayed due to the spread of covid 19 in 2020, 2021 and at the beginning of 2022 have already been conducted. The remaining exams will be held soon and the conducting exams in the next year will be normalized, the minister mentioned. Further expressing his ideas, the minister said that it is necessary to enforce the emergency law to make the country stable at this moment. Even if the emergency law was passed it was not fully activated using its all regulations. There must be a government for a country and if the actions were not taken for protecting the parliament, the foreign loans from international financial institutions and the foreign investments would not have come to the country. The minister also mentioned that the political stability is needed to solve the burning issues in the country and the government has to face crucial problems as it took the responsibility of solving the problems of people. The government draw the attention towards the problems of young people while facing the critical situation of not having the monetary reserves, foreign loans, decreasing the foreign remittances and the prevailing a global economic crisis.  The minister also expressed that the places like Galle face ground not being out of struggles is a great obstacle for the foreign exchange earning tourist industry in the country.