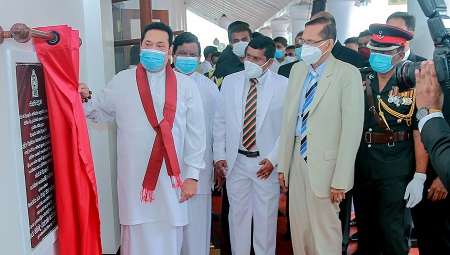 After a complete renovation of the dilapidated buildings of the Thurston College which celebrates its 71th birthday, it was given to the ownership of the students on 11.01.2021 (today) by The Present Prime Minister of Sri Lanka Mahinda Rajapaksa who is also a past pupil of the college.

The Thurston College which is one of the leading national schools in the country was opened on 11th of January 1950 with the patronage of the then Minister of Education E.A. Nugawela. Scholars in various fields famous locally and internationally, officers in defense forces, artists, media personnel and businessmen were generated from the Thurston College and the work of complete renovation of its buildings was started in August 2020. More than 3000 students are learning in this college.

A large gathering including The Minister of Education G.L. Peiris, The Minister of Trade Dr. Bandula Gunawardana, a past pupil the secretary of defense (Retired) General Kamal Gunaratna and the principal of the school Pramuditha Wikramasingha joined in this occasion.