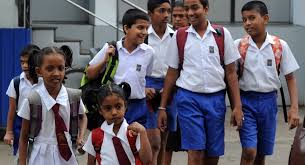 The arrangements have been made to start the second term of all government schools from tomorrow (19) strictly following the instructions provided by the health authorities about the starting the schools and also considering the instructions given in the circular issued by the ministry of education in March under the current situation of health protection.

The Secretary of Education Professor Kapila Perera mentions that the actions must be taken according to the same procedures implemented in the previous school term until new recommendations are submitted by the Director General of Health regarding the calling students to the schools. Accordingly the instructions have been given to take all students to the schools if the number of students in one class is less than 15. If the number of students is between 16 and 30, they must be called as two groups and if it exceeds 30 they must be taken as 3 groups.

Thankfulness is extended to health, transport, defense and various other sectors for their support given so far to take children to the schools while following the health instructions such as maintaining social distance, washing hands, wearing face masks, not exchanging food and consuming only the food brought from home. The secretary of education further stated that he expects everybody will act in a responsible manner in the future also.

It is a matter of satisfaction to be able to provide face to face educational opportunities to all children in the country calling them to the schools under the special instructions provided by the minister of education and it was possible to open schools due to the support and the responsible behaviour of the people in the country in a situation a third wave of covid has also emerged in the world. The secretary also emphasizes to keep in mind that the risk of covid has not been eradicated completely from this country.

The secretary of education further pointed out that it is requested from all sectors to extend their support to minimize the shortcomings in the process of the decision and implementing the procedure for taking children to the schools as a country under the instructions and full guidance of the President, the Prime minister and the Minister of Education, instead of criticizing these activities..