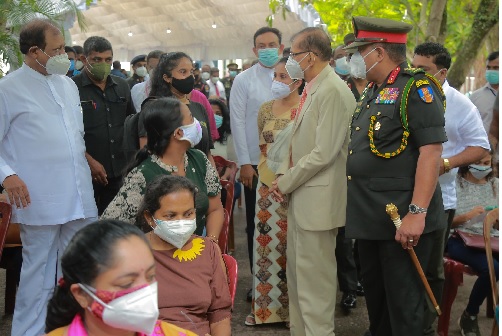 The program of reopening schools will be definitely started in August – The Minister of Education Professor G.L. Peiris

The Minister of Education Professor G.L. Peiris said that the government is taking actions to open the schools, step by step as soon as possible according to the terms and conditions of health sectors and the first step of it will be taken in August.

The minister stated this while attending the occasion of starting the ‘island wide program of vaccinating of all school teachers’ on 12.07.2021.

Distant / online education cannot be considered at all as a successful alternative for the education provided by the teachers in the classroom and there are some defects in it. Therefore, the objective of the vaccination program for teachers starting from today is the reopening schools as soon as possible.

This program starting from today for the teachers in Colombo zone would be able to complete the vaccination of all teachers in entire Colombo district. This program will be implemented throughout the island. The target is 242,000 the total number of teachers in the country and also a considerable number of teachers have been vaccinated so far. This vaccination program has been arranged so as not to cause any inconvenience to the teachers and also protecting their respect.

The minister further stated that if the children miss their education for a year, it cannot be regained forever in their lifetime and it will be an eternal problem of their lives. And also, he expressed his thankfulness to those who directly supported to make this program a success including HE the President, the health sectors and the Tri-forces including the Army Commander.

A gathering including the State Ministers Susil Premajayantha, Piyal Nishantha and Dr. Seetha Arambepola, Member of Parliament Pradeep Undugoda, the Army Commander General Shawendra Silva had joined in this occasion.