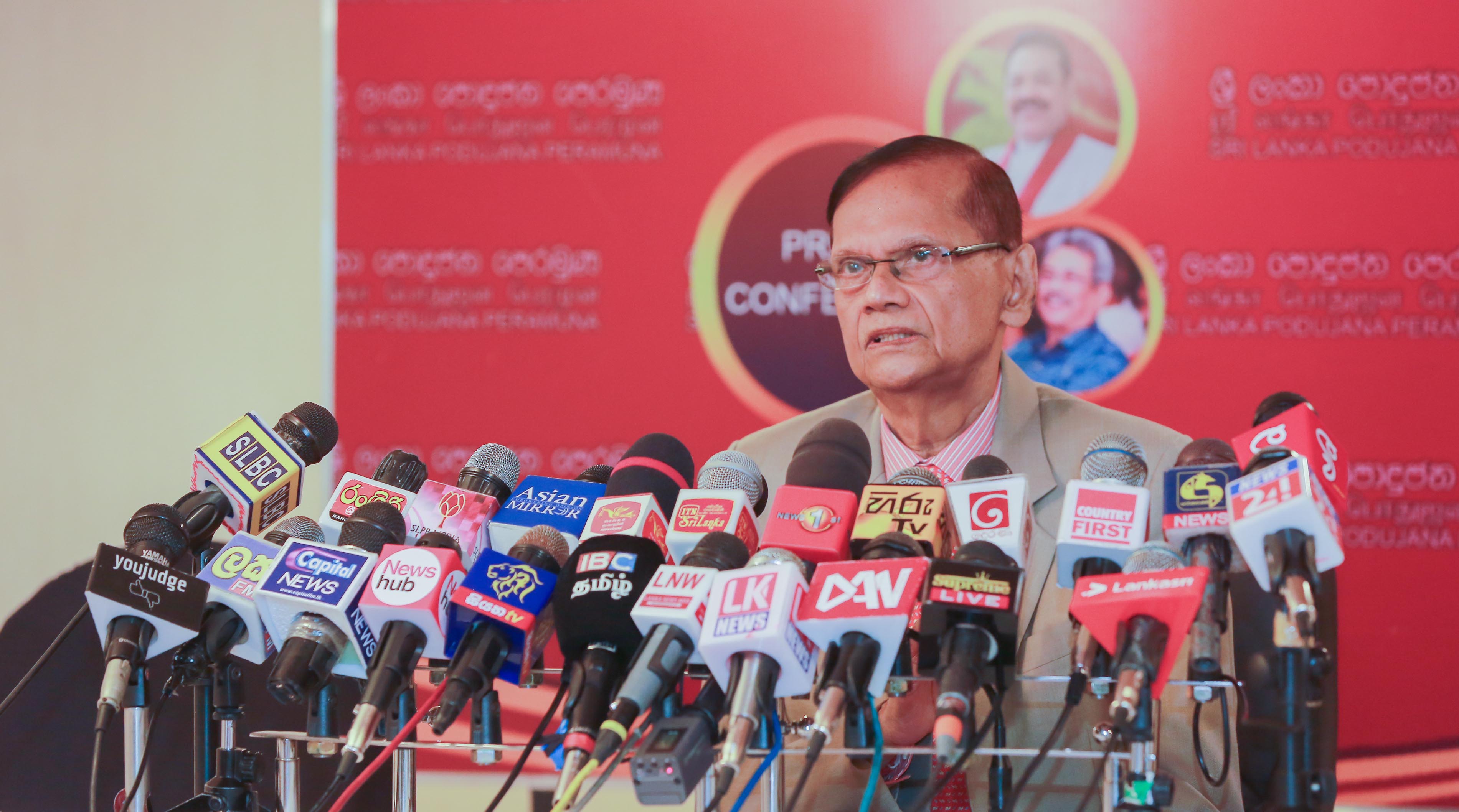 The discussion about Sri Lanka at the human rights commission, Geneva is going on. Today also several countries are scheduled to join the debate and express their views. Right from the beginning we said that the report submitted by the commissioner of human rights is confederating. That is not a justifiable one. The deficiencies present in her report have been accepted even by her office also and have expressed that it is appropriate to do some amendments. But those are not completely adequate. The foundation of that report is totally wrong. It is not a report prepared for the justice for our country. The final vote for this will come during next two three weeks, said The Minister of Education Professor G.L. Peiris. The minister said this at a press conference held on 01.03.2021 at Waters Edge Hotel, Battaramulla.

Further expressing his views at this occasion the minister said…

The base for the debate about Sri Lanka held at Geneva during the last week was the report of the human rights commissioner. When it is scrutinized now, there is no connection at all with the incidents happened during the war. It has drawn its attention to the internal affairs of our country. It contains the incidents which are totally outside of the subject of human rights such as the appointments made by the new government after the change of government in November 2019. This is a direct interference with internal affairs of this country. The existence of foreign political parties is also mentioned in this report. They are totally irrelevant. This program has been prepared taking our country as a political foot ball. The people who have done the war crimes are talking about war crimes.

At present where are the people who did the war crimes? They are not living in our country. Where are the people who forcefully dragged the children out of the schools and joined the armed activities tying cyanide capsules around their necks? Some of them wrote books very proudly. They published the pictures also. What are the other evidences needed under the international law to prove committing grave war crimes by them? The people who did them are living in those countries. Any step has not been taken against them. Those activities are also totally against those countries. No step has been taken against these war criminals under the laws of those countries. Such countries are submitting war crime accusations against us and chasing our war heroes. This is just like Kekille’s judgments. These do not have any connection with human rights, justice and equity. This is only strengthening the foreign expectations while interfering with the internal affairs of our country.

Is there a one and same criterion in the process of doing this at Geneva? Not at all. The United States of America has formulated the laws regarding this namely the Act of Foreign Operations and Patriotic Act. The parliament of America has passed two very important acts. In those Acts, some facts are very clearly mentioned saying that if any country investigates against America it is totally prohibited for the American state, judiciary, citizens and authorities to support those inquiries in any way. If anybody joins directly or indirectly with the investigations against the tri-forces of America, the American law considers it as a severe crime and enforces severe punishments. John Boolton who represented America in the United Nations Organization in those days, was a strong character. He directly expressed if the international court sends any official to America for inquiring against any American officer, they will be taken into custody immediately. In the same way the Great Britain also has passed laws saying that it is illegal to do any investigation against the queen or the tri-forces. The laws have been prepared to take actions against them. Those countries have taken very strong measures regarding this matter, he further said.

Today the G.C.E. Ordinary Level Examination was started at 4513 exam centers throughout the island for nearly 622,000 students. It is being implemented according to the very methodical plans. Covid infected 38 students have sat for the exam. A special program has devised for the students becoming ill. For that purpose, 40 special exam centers have been established.

Whenever the efforts were made to conduct the examination, there were people who looked at it negatively. All these are negative for them. But the parents and children demanded from us to hold the exam and to start the schools for children. Not to sabotage the education of children. Because of this, there is a very good appreciation of the people   for the government. We completed the advanced level examination successfully for 362,000 students. There were people who spoke against all these things. But the people and the parents were with us. We can make ordinary level a successful one just as the advanced level, the minister said.