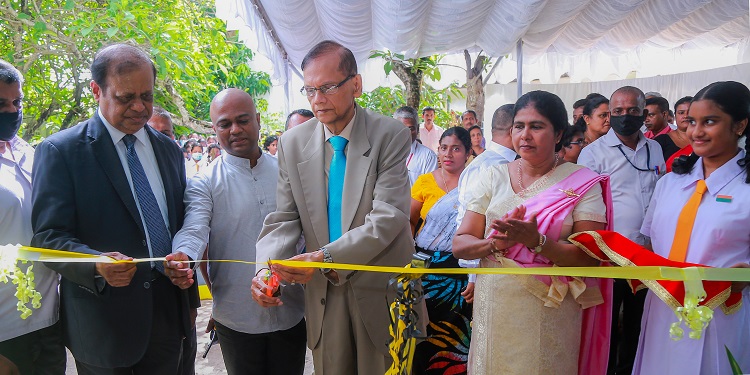 The gap between the modern job opportunities and the education provided to the children must be removed. – The Minister of Education G.L. Pieris

The Minister of Education G.L. Pieris stated that the gap between the modern job opportunities and the education provided through the schools and the universities in this country must be removed and if not, there will be a younger generation going against the prevailing system and living in disgust with entire society.

The minister expressed these views when the opening ceremony of four storied building newly constructed with the financial allocation of 48 million rupees at Anula Vidyalaya, Nugegoda held at the school premises with the patronage of The Minister of Education G.L. Pieris yesterday (16).

Education system of this country must be devised in the way that it creates the scholars with the skills of using their acquired knowledge in logical way with analytical skills but it cannot be done by the ministers in charge of the subjects alone. The attention will be drawn towards it according to the views and suggestions taken all from grassroots levels, the minister pointed out.

Further expressing his ideas the minister said that the value and strength of a school cannot be judged by its buildings. That must go beyond it. The teachers must teach contentedly to the children. There must be teachers in the school who teach affectionately to the children. We must draw our attention towards it also.

The minister expressed his congratulations saying that he appreciates the service rendered by Anula Vidyalaya to the country providing learned intelligent human resources to various fields on the country during the last eight decades and may this college be able to do more in the future than the past.

The minister further stated that the leading schools like Anula Vidyalaya can provide a good assistance to the village school improving program which is emphasized by HE the President in the development of education in this country and the minister requested to provide that assistance in the future.