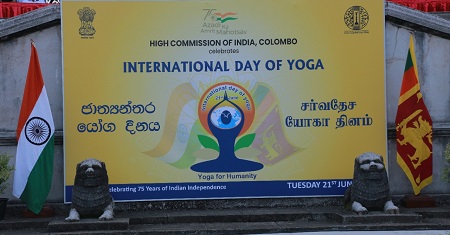 The Minister of Education Dr. Susil Premajayantha says that actions will be taken to shorten the coming school holidays in August and December and increase the days of conducting schools whereby all missed learning periods by children will be covered. The minister said this after a meeting held at the premises of Independent Squire regarding the international Yoga day which falls today (21.06.2022).

The minister further stated that these special educational programs will be conducted in the months of August, September and October and the necessary activities for conducting all training sessions are being already arranged based on the data and information obtained daily through the coordination with the Directors of Education in all nine provinces.

The minister also said at this occasion that it is reported the attendance of students and teachers in rural schools is 70% – 80% except in the main cities in the island.

Further expressing his ideas, the minister said that the approval of the cabinet of ministers has been received for the twenty first amendment to the constitution. After receiving it again as a draft from the Legislative Draftsman cabinet approval will be taken and it will be included in the parliamentary agenda. Then any party can challenge for it going to the supreme court within 14 days and depending on the orders received from the supreme court it can be taken for the parliamentary debate.