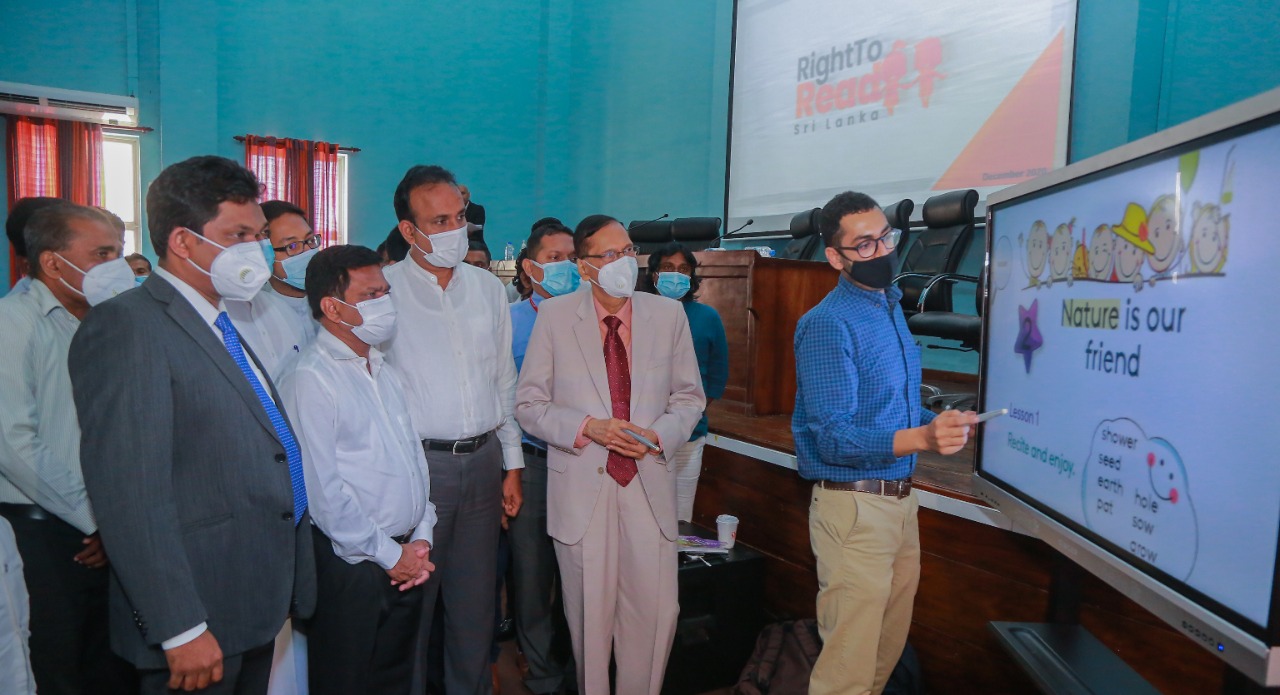 The official program for providing smart class to two hundred schools in southern province under the island wide English smart class project designed in collaboration with the modern technology with the aim of promoting English language skills of the students in schools was held today (15) with the leadership of The Minister of Education G.L. Peiris.

The Minster of Plantation Industries Ramesh Pathirana, The Secretary of Education Professor Kapila Perera, Chief Manager of the Right to Read Project Mr. Azath Omar, the Media Secretary of the Ministry of Education Mr. Buddhika Wickramadara and a large gathering of education officers had joined in this official event held at the Labuduwa Dakshinapaya premises, Galle.

Expressing his ideas at this occasion The Minister of Education G.L. Peiris said that the learning of English is not limited only to learning a foreign language but English is also an essential coordinating language to maintain the mutual relationships among nations, to understand their ideas and thoughts. The minister further said that there was a time when English was termed as Kaduwa because the English illiterate people were cut off from the English educated privileged people. The inability to use the English language has been an affecting factor in many occasions for the mismatch between the education received by the youth in the country and the employment opportunities in the job market, the minister pointed out.

The minister further mentioned that the smart class program will be an immense benefit for improving English language skills in a more attractive way for the school children and he expressed his thanks to Right to Read institution for providing the sponsorship for this program. This English Smart Classes are conducted through an internet app named Read to Me including the courses prepared based on the text books related to the subject of English in the school curriculum from grade 3 to 8.  It has been planned to implement the English smart class program covering all schools in the country by the year 2022. The minister also expressed his thanks to the Media Secretary of the Ministry of Education Mr. Buddhika Wickramadara for providing the coordinating assistance for giving smart classes to 100 schools in Galle district. In addition to this, the provision of smart classes to 100 schools in Matara district was also happened today under the leadership of the minister of education. So far more than 500,000 students in 852 schools in the country have been connected with this program. This program has already been implemented in the schools in Northern, Uva, Sabaragamuwa and Central Provinces.