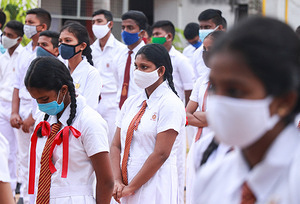 Schools must be opened as soon as possible under the health guidelines – Minister Professor G.L. Peiris

The Minister of Education Professor G.L. Peiris said that the present government is in a stern position that the actions must be taken to open schools as soon as possible under the health guidelines. The minister stated this at Sri Dharmavijayaloka temple, Pannipitiya on 20.12.2020 after meeting Rev. Dr. Iththepane Dhammalankara Thero who has been confirmed in the position of Chief Nayaka Thero of Kotte Sri Kalyani Samagri Maha Sangha Sabha of Shyamopali Wansika Maha Nikaya.

We will be able to give a definite statement about the opening of the schools very soon. Sometimes it may be tomorrow. I came here also to receive instructions from Rev. Nayaka Thero about this matter. The view of the venerable Thero was also the schools must be opened as soon as possible to safeguard the children’s right to education. At the moment we are having discussions with The Minister of Health, the Secretary of the ministry and the Director General of Health on this matter. The Nayaka Thero also informed that it is suitable to open the schools under the guidelines and recommendations provided by them.

Although all the schools in the country cannot be opened simultaneously, it must be done step by step. At the moment all sections in the country are becoming normal. Covid 19 has been a challenge not only for our country but to the entire world. We must overcome this challenge as a government and as a country as well. The right to education of our children must be ensured. We are discussing the ways of opening the schools gradually, about the health guidelines given to the schools, principals and the committees and also about the authoritative powers given to the schools for taking actions according to the relevant health instructions, the minister said.

When a media person asked about the MCC agreement, the minister said,

“Yes, HE the President said at the moment of coming to the presidential election that a strict policy will be implemented to safeguard the country from the MCC. He acted accordingly. We know that in some countries where the MCC had been signed, the people in those countries have to become labourers. Because there is such a danger in MCC, he submitted very clearly the reasons for not signing the agreement. The opposition earlier said in this regard that the government will sign this MCC secretly whatever it says. Now they say even though it was abolished the government will agree with it in a different way. It can be firmly said that as a government and The President as the leader of the country are in a firm decision about MCC.”