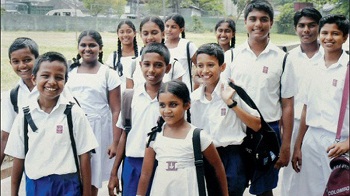 Schools are Reopened. Examinations are Conducted.

Just as the measures were taken to close down the schools at the moment the first Covid 19 infected person was discovered considering the health protection of the children, the Ministry of Education has already taken steps to reopen the schools under 4 stages becoming the first country in the region to control successfully the spread of the virus within short period of time. The Minister of Education, Sports and Youth Affairs Dallas Alahapperuma says that this decision was taken on the instructions of HE the President and Hon. Prime Minister and based on the recommendations of the Health Authorities about the health safety situation in the country.

The minister expressed these ideas while participating in a special media discussion held today (29) at the Ministry of Education to sensitize the media about this matter.

Within the process of reopening of schools under several stages, the first stage is implemented from 29th of June and the principals, teachers, non-academic staff and the school management staff of all schools should call for duties and do the pre-planning activities such as sterilizing the school premises, cleaning and the preparation of timetables. For this purpose the duration of time until 03rd of July has been allocated under the first stage.

The date for reopening the schools for the students in grades 1 and 2 will be delayed further and it is scheduled to be notified later.

The minister further stated that he recalls thankfully the support extended by various sections including the teachers to continue the educational activities of school children through online method during the recent past and specially the assistance provided to children through the mass media.  And also the minister expressed his thanks to the officers in the Sri Lanka Examinations Department and the Commissioner General of Examinations for releasing the results of the Ordinary Level examination during the past challenging period of time even amidst the curfew. The minister extended his thanks also to all the officers in the establishments including the Ministry of Education and the National Institute of Education for their cooperation.

It was a special feature that could be identified during the recent past the effort made for acquiring the modern technology among all the social strata, developed, non-developed as well as among the rich and the poor and even though the Corona virus is a devil, it has become a disguised blessing in this regard, the minister mentioned. The minister also mentioned that it is a positive trend that the parents’ vision of their children engaging in technology in the face of this challenge that kept the nearly 5 million Sri Lankan children in house arrest for over 100 days.  The next challenge after reopening the schools is the use of the mode of transport and during the next week the steps will be taken to prepare a proper program having discussions with the authorities in the transport sector including Sri Lanka Transport Board, Private Bus Union and the Union of School Van owners, the minister further stated.