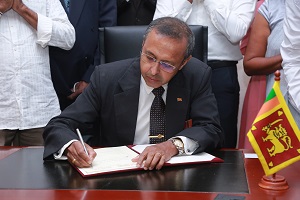 Professor K.K.C.K Perera who has been appointed as the new Secretary to the Ministry of Education assumed his duties in the morning today (17) at the ministry.

Professor K.K.C.K Perera had been serving as the Vice Chancellor of the University of Moratuwa and he has also served as the Dean of the Engineering Faculty of the same university. During that period he has initiated several activities including the policy formulation and administration of the university, management of learning, rating the universities, standardizing the departments and also planning and implementation of staff development activities.

He has also worked as a lecturer on various subjects including energy technology and environment and the principles of thermo dynamics for undergraduate courses, graduate courses and post graduate courses. He obtained his first degree from the Moratuwa University in 1986 and has obtained PHD from the University of California. In addition to this Mr. Perera has been an active member of several institutions including Sri Lanka Energy Manager’s Association, Engineering Institution and Automobile Engineering Institution.

The Education State Minister Vijitha Berugoda and several senior officers of the ministry of education had joined in this occasion.