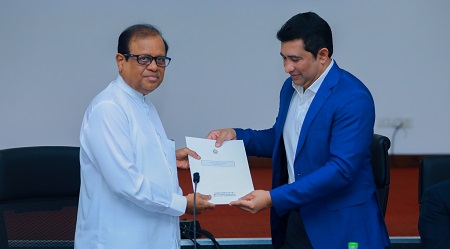 More space will be given to sports in education reforms, says the Minister of Education.

The Minister of Education Dr. Susil Premajayantha says that in the process of designing the education reforms, more space will be allocated for sports and the sport is connected with the Health and Fitness which is the first field among the six basic principles of it. The minister also said that the majority including the members of the parliament admit the necessity of an education reform and it needs 5 years to implement this education reforms. It will take 10 years to complete it. Accordingly, the administrative reforms of this will be started from the first of January next year.

The minister stated these ideas while participating in the program held at the Ministry of Sports and Youth Affairs with the aim of preparing a national sports plan for the first time collaborating with all sections directly responsible for sports. Further expressing his views at this occasion, the minister said that capacity building and changing the attitudes of the children is necessary and it is a main assessment problem to measure entire education of 11 or 13 years only with an examination.

The method used in developed countries is to decide the final assessment adding the marks of continuous assessment happening in the classroom and the marks of the examination, said the minister. If it does not happen, the children with more memory power will score high marks and the children with skills and abilities will lose that opportunity, the minister pointed out. There must be 22,000 researchers in our country in relation to 24.5 million the total population of this country but there are only 5000 at the moment. Out of them only 2000 people do the research that can be practically used and all the others are theoretical researchers only, the minister said.

The children in other countries get trained to use practically the knowledge they acquire through curious search from the pre-school age but in the education system of this country, out of 40,000 students selected to the universities most of the graduates except the few who study subjects like Medicine, engineering or Valuation, all the other become unemployed graduates. To stop their struggles, the governments have to give them appoints in state service.

Even if the 31,000 graduates taken to the field of education were directly sent to the classrooms, they have not been taught to teach.  The untrained people can become preachers but they will not be teachers, said the minister. The annually selected 150 or 200 Advanced Level passed applicants according to the value of Z-score to Bandarawela Uva National College of Education out of 17 in the country, are trained as sports teachers and that training is consisted of a combination of technical and psychological balance. The minister also said that the opportunities can be provided for the sports subject to remain until 3.30 pm after school for sport practices with the coordinated agreement between the ministry of Education and the ministry of sports.

The minister mentions that the aim of these reforms is to create a generation of healthy children in relation to the education reforms within the general education system and creating competent sport persons through the changes of attitudes. The State Minister of Foreign Affairs Tharaka Balasooriya, The Chairperson of the National Sports Council Mr. Arjuna Ranathunga, Provincial Governors and secretaries, acting Sports Secretary Mr. U.D.C. Jayalal, Commanders in Chief of three forces, the Chairperson of the University Grants Commission Senior Professor Sampath Amarathunga and a group of other officers attended this occasion held with the leadership of  The Minister of Education Dr. Susil Premajayantha and The Minister of Sports and Youth Affairs Roshan Ranasingha.