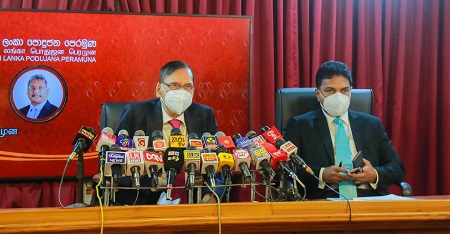 It is uncertain to open the schools at the end of August or at the beginning of September- The minister of Education Professor G.L. Peiris

The Minister of Education Professor G.L. Peiris said that the decision of the cabinet as the best procedure to solve the problem of teachers is to take a reasonable action for entire public service considering the current economic condition in the country through the budget proposals which is due to be submitted after three months.

The minister said this while participating in a media discussion held at Nelum Mawatha, Battaramulla on 09.08.2021.

While remaining the historical issue of teachers’ salary anomalies for about 24 years unsolved, a several governments ruled the country without taking any action to solve it. But the teachers never raised the position that they do not teach the children or quit from educational activities. When a crucial situation in which the country has been experiencing the risk of corona and the priority has been the protecting the lives of people in the country, the question arises whether taking this trade union actions are reasonable that had never been taken in the history. Shouldn’t it be taken into consideration how these measures could be justifiable consciously?

Nobody can say that this government is not sensible. And also, nobody can say that the government is trying to conceal or forget about this issue. The representatives of the trade unions were met several times to discuss this matter. Along with me, the cabinet ministers also participated in them. Furthermore, Hon. Prime Minister had a discussion with those members including 07 cabinet ministers. This issue must be discussed definitely with the salaries and statistics commission. Their ideas and recommendations must be taken. The cabinet also discussed this matter twice. There are no two or three years for the next budget. There is only three months’ time. But their strong demand is to solve this problem today itself. The question that I am directing to the majority of teachers who are not aligned with political motives is whether demanding such thing at this occasion is reasonable. We are very happy about stopping things such as marches and vehicle parades by some of them. It is clear that it increases the spread of covid and threat to the lives of entire population.

We have planned to give the second dose of vaccine to the teachers and non-academic staffs before the end of August. After that our intention was to open the schools, step by step under a proper procedure according to the guidance of health recommendations. But under the prevailing situation it became uncertain. Under these circumstances it is essential to provide education to the children by strengthening the online methods. If the teachers take actions to withdraw from it, the most affected and suffered will be the children who do not even have the necessary facilities. Shouldn’t it be thought about the social justice of that action?

The children have become disturbed because of the inability to release the results of the G.C.E. Ordinary Level exam 2020 that has already been finished. Out of the 622000 students who sat for that exam, 169000 students have studied aesthetic subjects. Because of the covid pandemic, its practical tests could not be done. Although the necessary arrangements have been done to conduct those tests, the trade unions have said that they have decided to quit from it also. Therefore, release of the results of 622000 students sat for the ordinary level exam 2020 will not be possible. Can such action be justified? By the morning today, 87% of teachers and non-academic staff have been provided with the first dose of vaccine. That means 254000 have taken the vaccine. If there is anybody without taking the vaccine, we request from them to take it. And also, the actions are being taken to provide the vaccine to the young people between 18 to 30 within 02 weeks’ time, also he said