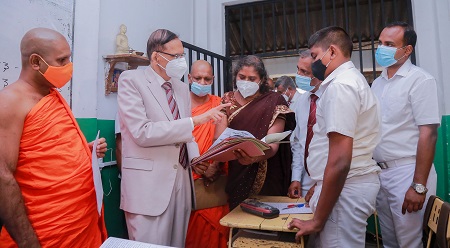 “It is expected to open schools in the western province before 15th of February for remaining grades under strict health protection” “ A request is made from the government to give priority to the teachers when the covid vaccine is given” – The Minister of Education Professor G.L. Peiris

At present, the schools in the western province have been opened for the students who are scheduled to sit for G.C.E. Ordinary Level examination in March and it is searched for the possibility of opening the other schools also in the western province for the remaining grades under the strict health protecting guidelines before the 15th of March, said The Minister of Education Professor G.L. Peiris.

The minister expressed these ideas while addressing media after an observation tour made today (29) to several schools in Colombo including Devi Balika School and Nalanda College for inquiring the information from the principals, teachers and the children about the way of conducting educational activities in each school, the success of online learning methods and the arrangement for health protection. The minister extended his thankfulness for the contribution made with a high motivation and dedication by the teachers and the principals to make this effort a success while maintaining the coordination of the parents.

He also mentioned that it is a very reasonable matter to give priority to the teachers in the process of providing covid vaccines as they are contacting children in daily basis and he makes a request from the government for this purpose.

While further expressing his ideas the minister said that…

Although the schools in other provinces that were closed due to the spread of covid pandemic reopened, the schools in the three districts in the western province were not opened for all grades. But we cannot darken the entire future of children under this risky situation. Because we as a responsible government are not ready escape from that obligation, took necessary measures to hold the scholarship exam and the advanced level exam among all challenges. Educational activities in other areas were also started. We had the strength to overcome all those challenges and to be successful.

The minister extended his thankfulness to the teachers for their unique service rendered during this difficult circumstance and said that it is not possible to regain the loss happening through the breakdown of education of the children. It is not practical to keep schools closed for a long time even though there is a risk in the country. The minister further stated that he believes it will be possible to turn the entire process into the normal situation successfully with the full cooperation of all sections including health, transport and defense sectors.

The minister stated that the authority has been given to the schools in Colombo, Kalutara and Gampaha districts in the western province to take steps to start the schools and if there are any issues in the circulars, the opportunity has been given to inform the ministry of education in this regard. Therefore, at the moment it is being searched for identifying the schools that can be opened before the 15th of February. The minister also said that the ministry of education has taken actions to provide necessary facilities and monetary allocations to the schools for running the schools ensuring the health protection.

The minister pointed out that the necessary actions are being taken to start the pre-schools in the western province but it is a practically difficult task to keep the social distance when work with the small children. Keeping the pre-schools closed is also a problem for the parents, children and also for the teachers. In addition to this, the possibility of starting the grades 1 to 5 is also being considered at the moment and it will be possible to open those grades also as soon as possible, the minister expressed his hopes.

The education officers including the secretary of the ministry of education Professor Kapila Perera and the private secretary Mr. Nalin Gamlath joined in this occasion.