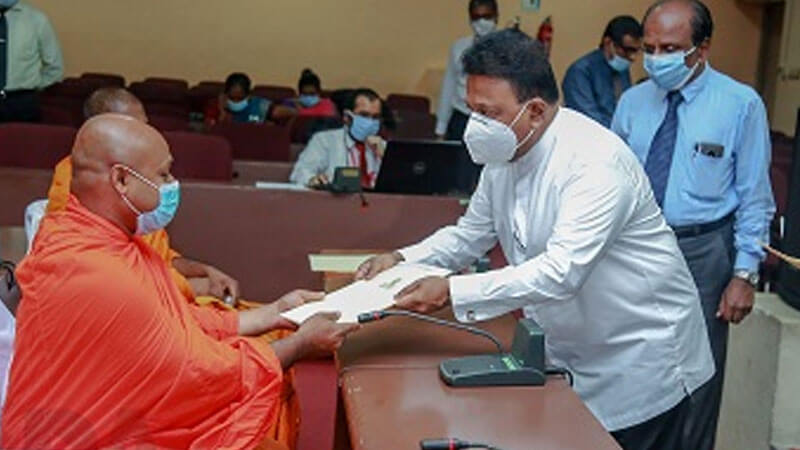 ‘Buddhist priests, other clergymen or nuns will not be placed in the government institutions as Development Officers on whatever grounds’… The Minister of Education, Sports and Youth Affairs Dallas Alahapperuma

The Minister of Education, Sports and Youth Affairs Dallas Alahapperuma states that the Buddhist priests, other clergymen or nuns will not be placed in the government institutions as Development Officers in the future; they all will be absorbed to the education system as teachers.

Graduate training scheme is a program implemented in different levels by governments from time to time and under this scheme the appointment of Buddhist priests and other clergymen as development officers in various government institutions had become a serious issue. As a result of making The President and the Prime Minister aware of this situation by Maha Nayaka Theros and archbishops, a cabinet paper on this matter was issued at the beginning of this year. Accordingly, it has been decided not to appoint any clergy including Buddhist priests and nuns as development officers in any government institution in the future. Marking the first step of this decision, twenty three Buddhist monks who had been serving as development officers in the ministry, were offered the teaching appointments today (27) at the ministry premises under the leadership of the Minister of Education.

Further stating his views at this occasion the Minister of Education said that this is an occasion the education in the country and the system of education is facing a challenge. Only the change of policies is not sufficient for changing the country. I invite you, the priests, clergy and nuns to interfere with the situation when the children are confined to their homes and they are having an anxiety about examinations and education. Some senior officers including the Advisor to the Ministry of Education Dr. Upali Sedara, the Additional Secretaries Hemantha Premathilaka, Anusha Gokula and R.M. Rathnayaka had joined in this occasion.