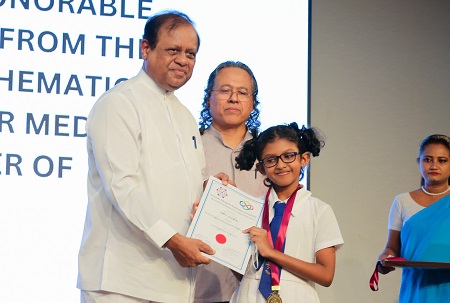 An education free of exam burden for children in the future…

The Minister of Education Dr. Susil Premajayantha says that he is engaged in a great effort to release the children from this oppressive mental torture of facing examinations keeping the subject knowledge in their memory for several years continuously. The minister said that the existing system of exam centered education must be changed going beyond the education reforms.

The minister stated this at the award presentation ceremony held for the students who had won in the national Mathematics competition. This function was held at the Colombo University and it was organized by Sri Lanka Olympiad Mathematics Council. While expressing his ideas at this occasion the minister further said that the university courses must be fully innovated technically so as to make a resourceful place to acquire universal knowledge. This transformational change must happen in the classrooms from the pre-schools and the children will have the opportunity to engage in an explorative free learning while asking questions and observing the environment with a curiosity in the kindergarten. The students will have the opportunity to mix with the universal knowledge at the university and will be able to produce effective creations for the society, the minister said.

The minister recalled that even in the past in this country, the creations like Ruwanweliseya were built using practically this creative technological knowledge and all these t must be integrated into our education system through observations and explorations. After obtaining degrees in this country another training has to be provided to engage in an employment and the education must be streamlined towards the degree courses consisted of vocational skills which provide the opportunity to engage in a profession just after obtaining the degree and come out of the university. Otherwise, the struggles cannot be avoided, the minister pointed out. He also pointed out that in the developed countries the children are given the opportunity to learn music as a subject that helps for mental balance while they are studying Biology and when the music is studied the subject of Mathematics is essential.

As a result of introducing the new technology, the period of time for the knowledge to become doubled has reduced rapidly only to two years today and it was 10 years two decades before. The full support of the Ministry of Education is provided for the speedy development of the subject of Mathematics which decides the maintenance of many other subjects. The minister also said that his aim is to provide many things that he himself deprived of to the children of this country.