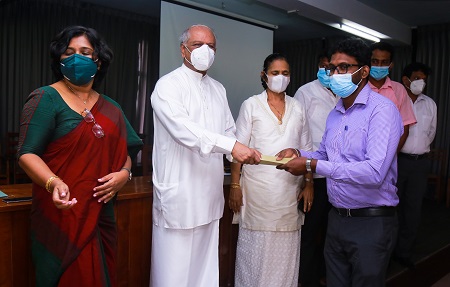 A majority of confirmed graduates will be affiliated to the field of education – The Minister of Education Dinesh Gunawardana .

The Minister of Education Dinesh Gunawardana said that out of 52,000 graduates confirmed in the public service, about 24,000 are affiliated to the field of education. They can serve as the guides to the children of the country after providing a training, he said.

The minister who is also the chairperson of the Maharagama development committee expressed these ideas while participating in the occasion of handing over of the appointment letters to the graduates of Maharagama Divisional Secretariat Division under the government program of confirming the graduates on 12.01.2022 at the same office.

The minister further stated at this occasion,

As the chairperson of the cabinet sub-committee of confirming 52,000 graduates, I say that our sub-committee has submitted the recommendations to confirm first and then to affiliate to the required field according to the willingness and the degree. Furthermore, when the covid spread dangerously and the country was locked down, the President encouraged all to do the work through online. As we are not an oil producing country, when we work online reducing the unnecessary travelling expenses the productivity goes up. Every moment we use fuel the money flows to the foreign countries.

The Minister of Finance has informed all relevant sections that the government service projects must be completed within the scheduled time frame. Therefore, the newcomers to the government service must specially keep this in mind. Our government solved the largest salary problem in the history, the teachers’ and principals’ salary problem, spending a large amount of money. They will receive the salary from this month of January.

In the meantime, the trainee graduates of the Colombo north and the central Colombo were given the permanent appointments as development officers on 12.01.2022 with the patronage of the chairperson of Colombo development committee, MP Yadamini Gunawardana. The Member of Parliament expressing his ideas in this event held at the divisional secretariat Colombo Dam Street said,

“It is necessary to manage the economy according to the prevailing situation of the country. Because this is a period of time dawned for marching with the challenges. We are spending a time which is involved in big challenges not only in health sector but also in the economic sector. Now the payments of salaries in public service and the pensions have been surpassed billions and come to the trillions. That means 1500 billion or one and half trillions have to be allocated annually. Then what is the income of the state sector? It is only 1000 billion or one trillion. We have to pay 1500 billion but the income is 1000 billion. The majority of the recurrent expenditure is the salaries. Therefore, the people joining in the state service must work hard for the country.”