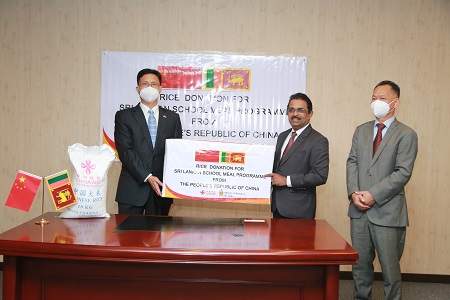 A donation of ten thousand metric tons of rice from People’s Republic of China.

The school food program implemented successfully for about 30 years providing mid-day meal to one million eighty thousand children in 7925 schools in the country is not properly conducted now in the face of current hyper-inflation situation in the country. The Ministry of Education has taken steps to use the donation of 10,000 metric tons of rice provided to Sri Lanka by the Peoples Republic of China for this food program as a relief measure for it.

Accordingly, the official handing over of second stock of 1000 metric tons of rice provided by the People’s Republic of China by the Ambassador of China Mr. Qi Zhenhong to the Secretary of Education M.N. Ranasingha happened at the premises of the Ministry of Education recently. The students have been selected considering the poverty and the nutritional deficiencies and the majority of those schools are of less than hundred students. The amount of 30/-rupees money allocated for one meal has been now increased up to 60/- rupees. Accordingly, the health and nutrition branch of the ministry of education is taking steps to implement properly the school food program and the stock of rice scheduled to be received will also be provided to the schools.

It has also been planned to implement cultivation programs in school premises as well as in home gardens to maintain this school food program successfully in the future.