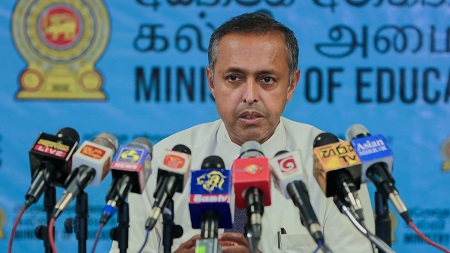 The Secretary of the Ministry of Education Professor Kapila Perera

The Secretary of the Ministry of Education Professor Kapila Perera said that the cabinet approval has been received to change the period of time to hold the general certificate of education ordinary level examination and the general certificate of education advanced level examination by changing the present education system which deviate school children in Sri Lanka from education for about 09 months. He expressed this while addressing the media in Colombo.

A methodology is being prepared to obtain the details from the Election Commission and the Department of Registration of Persons for the purpose of facilitating the determination of districts. Only 0.1% of candidates have the opportunity to enter the university taking positive results after re-scrutinizing activities. They have the opportunity along with the students who enter through appeals etc. The changes are done as mentioned on the 21st page of “Vision for the Prosperity” the policy declaration of HE the President Gotabhaya Rajapaksa.  We would be able to give the life time saved by the children in international schools sitting for the exams like Edexel, Cambridge and London to the children who come out of our education system, he said.
Possibility is there for anybody to submit his proposals and ideas in several media to the “Digital Platform” that has been already established to obtain the proposals and ideas from all in the country for the complete education reforms that has been planned to be implemented by the present government. Actions are being taken to give the best education system suitable for the country and the world to the children in our country in 2023, he emphasized.