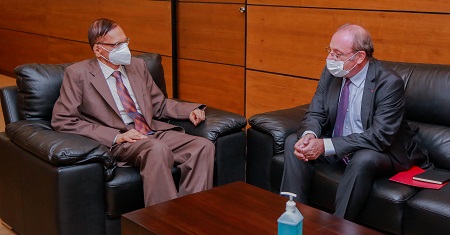 The Minister of Education Professor G.L. Pieris mentioned that the programs must be planned to
develop educational ties between Sri Lanka and France in the near future and to maintain strong
cooperation between the two countries. Especially, the importance of learning foreign languages
must be emphasized to the students and the contribution of the French government is expected
for improving the vocational education opportunities and training programs for Sri Lankan
students, the minister said.

There was a special meeting between The Minister of Education Professor G.L. Pieris and the
French Ambassador Mr. Eric Lavertu yesterday (5) at the ministry of education and the minister
expressed these ideas there.
The Ambassador expressed his special appreciation about the contribution provided by Professor
G.L. Pieris as the minister in charge of education and revealed that when he had a special
meeting with HE the President Gotabhaya Rajapaksa, the President had mentioned that he
expects to do several progressive changes in the system of education in Sri Lanka under the
Minister of Education.

The possibilities of providing basic degree and post graduate degree opportunities for students in
Sri Lanka and France were discussed here and The Deputy Ambassador Aurelien Maillet
mentioned that actions can be taken to provide and to expand the available such opportunities
after the corvid situation is normalized. Furthermore, discussions were held here to prepare a
future plan for propagating the French language within the school education and the university
education in this country.

The minister of Education further stated at this occasion that it has become easier to implement
future education plans since the ministry of education is functioning within a broader purview
under four state ministries for the subject of education.
A gathering including the Deputy Head of the French Embassy Mr. Aurelien Maillet, Advisor for
Culture and Cooperation Mr. Bernard Lelarge, Media Advisor Ms. Dinusha Illeperuma and the
Personal Assistant of the ministry of education Mr. Charith Madusanka Marambe had joined in
this occasion.